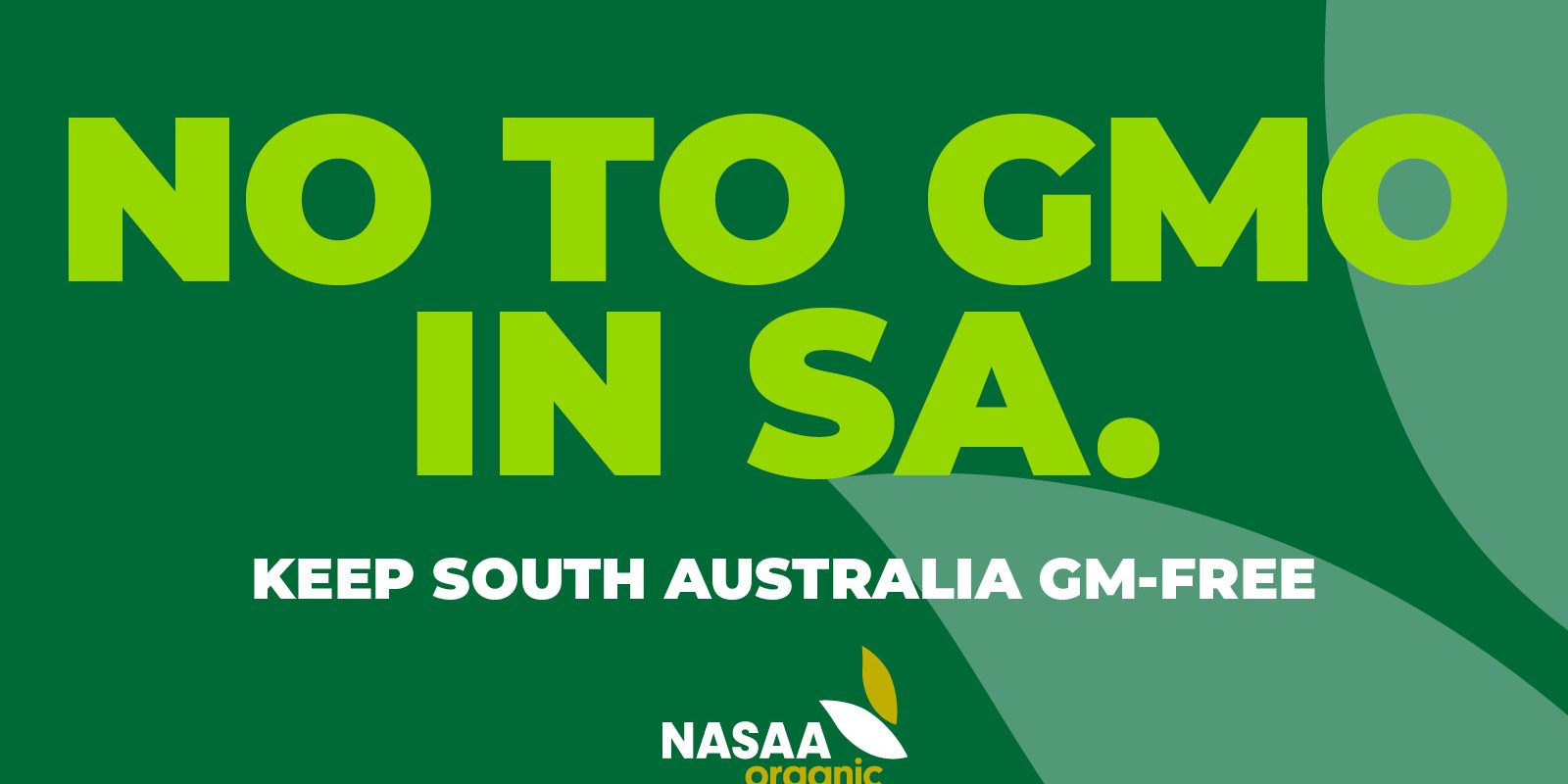 Since the announcement by Primary Industries Minister David Basham that there was not enough evidence to justify any council area remaining GM-free outside of Kangaroo Island, (which had its moratorium preserved under a separate deal last year), NASAA Organic has been fielding calls and enquiries from concerned residents and producers.

“There are already far more certified organic hectares in South Australia than will ever be dedicated to GMO crops and organic is still growing rapidly in area and economic value, but organic growers are still not guaranteed of protection from drift of GM seed or pollen onto their land and crops.” said Tim Marshall, Chair of NASAA Organic.

“After all the work that was undertaken by Councils, industry and residents, I cannot imagine how angry and disappointed they are feeling right now”, said Alex Mitchell, newly appointed General Manager of NASAA Organic.

“Local Councils are key to business development and also wear the burden of many State Government Decisions, as they are at the coal face of community and business survival. Through the extensive application process, council residents and consumers have clearly expressed their preference for GM free.

Council deal with the outcomes of such decisions, which affect businesses across their area, many Councils now operating with increased pressures on their limited resources.

“I have recently come from Tasmania, where the concerns and industry information on the value of GMO Free status has been sufficient to uphold the rolling moratorium for a whole State continue. For not one mainland SA Council to have been successful in their application appears to show that a “cart blanche” decision has been made by Minister Basham and the SA Government”.

NASAA Organic provided substantial help and assistance in the application process, assisting in providing ongoing and clear evidence of the value of GM Free Status for industries.

The GM-free moratorium has brought many food industry benefits since 2004, including:

“Many customers choose certified organic product because they know GMO is not allowed in the Standard for certification,” Alex explained.

“The 2019 Australian Organic Market report had the total value of the national organic market currently estimated at AU$2.6 billion, with Australia being home to the world’s largest area of certified organic land – around 51% of the global total.  The global market for all organic products is estimated at US$97 billion, that is a substantial market to place product into and a good indicator of the value of getting organic certification, as many of the customers may just be buying products due to that part of the Standard that does not allow GMO in the system.”

“We are relieved to hear Kangaroo Island farmers and processors will remain GM-free under the government’s deal. They earn big premiums for the island’s GM-free grains and beverages, in local and export markets”

NASAA Organic will be assisting Councils with “alternative” strategies to underpin their wishes for GMO Free status.

“Our certification of organic products allows customers the knowledge that they are consuming GMO Free products.  Certification underpins business ability to market to GMO Free markets, a strategy many businesses have now undertaken to access premium markets.”

Alex Mitchell also noted that there is an increase in applications to certify public spaces such as schools, and other public lands.

“COVID has brought about a change in community, with greater engagement in advocacy from community”, Alex noted.

“We will continue to support the local and business community in their endeavors to provide safe products, services and spaces for every resident. We will also continue to work alongside all levels of Government to help facilitate the co-existance of organic and biodynamic production alongside conventional agricultural production”